I'd never heard of cross-shaped staurolite stones until a few years ago when I stumbled upon Fairy Stone State Park in Virginia. I was just looking for a place to camp, but I discovered soooo much more. The campground is charming, indeed, with its lake and log cabins. And I swear I spotted quaint little fairy homes everywhere I turned—tucked in twisted tree roots and beneath small, rocky cantilevered ledges.  It was Easter weekend, and I hunted for fairy stones instead of painted eggs. I left with a purple-felt Crown Royal bag filled with stone crosses...and a rough first draft for The Legend of the Fairy Stones. 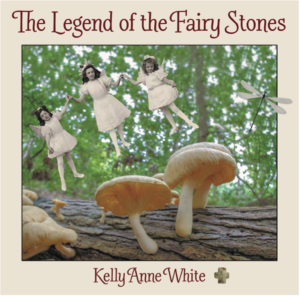 A photo of the very first fairy stone I found makes an appearance in my book's back matter. The stone on the front cover, however, is not from the park in Virginia. That image, like all of the artworks in The Legend of the Fairy Stones, is one I mined from the public domain—another lode of gems hidden in plain sight. The fairy stone on the book's cover is from Georgia, where staurolite is the official state mineral. (Pssst...that same stone is buried throughout some pages of the book to play peek-a-boo with young readers.) 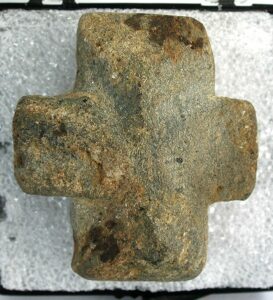 Likewise, the mushroom forest photograph on the book cover is not from Fairy Stone State Park. But...it is from Virginia. It is York River State Park in Williamsburg. 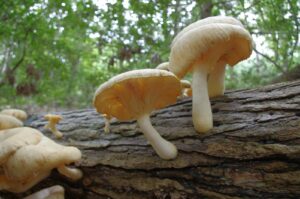 The three darling girls in fairy costume are from a photo album in the collection at the Library of Wales. The photograph of little Patty, Anstice, and Freda was snapped at a historical pageant in 1909. 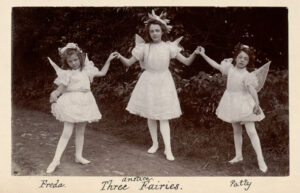 And the dragonfly on the book cover? She's an 18th-century illustration by Dutch artist Nicolaas Struyk. The drawing is part of the collection at the Metropolitan Museum of Art in New York, but it's currently not on view. 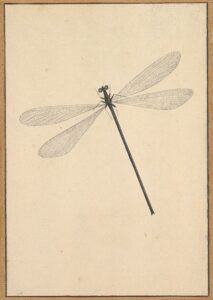 A few other pieces from the Met are in The Legend of the Fairy Stones. I'll blog about those on another day...